In Dynamo its a little confusing just exactly what vectors are....because Dynamo uses slightly differently wording than the typical nomenclature you see in the math books. And....and its easy to get points and vectors mixed up.

In Dynamo Vectors typically are used to describe a "direction". . for example if you are defining a structural framing member's up vector to point up in the "z" direction. then you would say vector = 0,0,0
meaning ... 0i, 0k, 0k which is the same as saying 1i, 1j, 1j

also note that vectors are defined as i, j, k which refer to the "x,y,z components" of a location in 3-d space respectfully.
Still confused? just remember two things

1. Vectors are NOT points even though they are defined the same
number, number , number
2. Vectors define direction using the "right hand rule"

maybe the image below will help 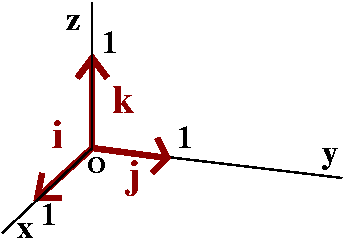 I hope that clarifies vectors a bit now go out and make some dynamo vectors!
Posted by Marcello Sgambelluri at 5:00 AM