Want all of my families I have ever built? Its now available in one spot!

Hello
I have some amazing news.
I noticed that over the last 10 years I have created some crazy Revit families and I never made them available to the public in one place until now.

So I teamed up with a company called  UNIFI who specializes in storing and managing AEC content. They agreed to host all of my content on their site under their subscription page. See image below. 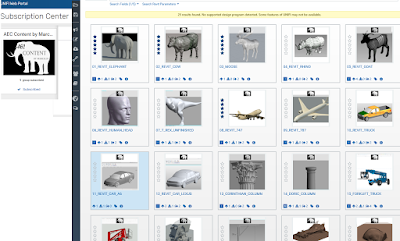 This would include many families that I never showed before or never gave to the public including the Revit Elephant, classical columns,  BatMobile Topo Model and many more
So what are you waiting for? ......

Oh..... So what if you are not a UNIFI Customer?
No Problem ... just get the UNIFI demo here and Download all the content before your trial is up :)


Posted by Marcello Sgambelluri at 5:14 PM No comments:

Have you ever wanted an alternate method to get and set parameters in Revit? Its easy just use the latest technology by Mcneel, Rhino Inside Revit!Just follow the steps below and good luck. 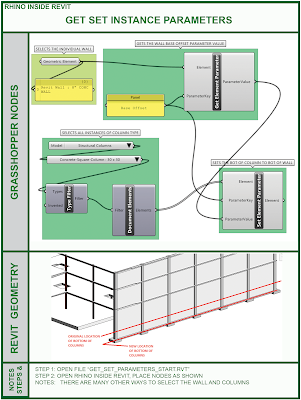 If you are not familiar with Rhino Inside read about it here.
If you want more of these types of examples they could be found in my new book
to be published soon.
Thank you readers and good luck with Grasshopper inside REVIT!

Posted by Marcello Sgambelluri at 5:10 PM No comments:

Have you ever wanted an alternate method to create structural roof beams in Revit? Its easy just use a 2-point adaptive component and Grasshopper (which uses the Rhino.Inside.Revit addin)
Just follow the steps below and good luck. 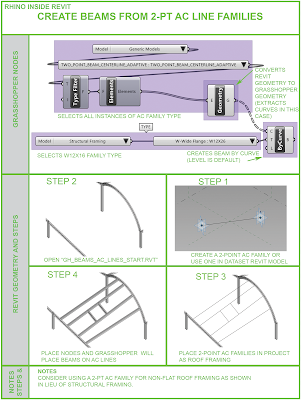 If you would like to see this as a demo watch this youtube channel
If you are not familiar with Rhino Inside read about it here.
If you want the Dynamo equivalent as shown above then read about it here.
If you want more of these types of examples they could be found in my new book
to be published soon.
Thank you readers and good luck with Grasshopper!

Ever wanted an alternative to convert surfaces from Revit to Rhino?
It's easy! Just use Rhino Inside Revit and Grasshopper and follow the steps below.

If you don't now what Rhino Inside Revit is just read this blog post. 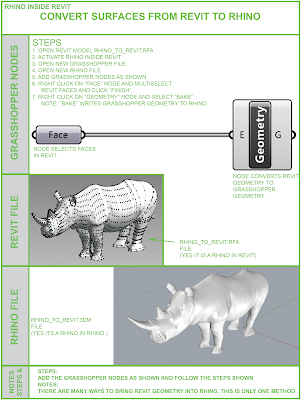 You could also download this Rhino Revit Family here feel free to dissect it and enjoy for educational purposes.
If you have any questions about this method or need further help email me at
marcellojs@Hotmail.com.
Also make sure to subscribe to this blog so you don't miss out on more exciting posts.
Posted by Marcello Sgambelluri at 2:54 PM No comments:

WHAT IS RHINO INSIDE?

A NEW TECHNOLOGY
There is a new technology that is emerging in our AECO+ industry.
It is called Rhino Inside.

Rhino inside means that Rhino is installed as an “add-in” to other software. This is revolutionary for software in AEC. In this blog post let’s focus on all the amazing things Rhino has to offer when it is attached to Revit….
and thus refer to Rhino Inside as Rhino Inside Revit.

WHAT DOES RHINO INSIDE REVIT DO?
For starters Rhino inside Revit makes a seamless by-directional handshake between Rhino and Revit so elements and data could be passed back and forth in real time.

….and…..There is more…. Much much more.
With Rhino Inside Revit you also get all of Rhino’s functionally including Grasshopper for Revit. Grasshopper is a visual programming language similar in concept to Dynamo although there are fundamental differences.

If you want to know more about grasshopper read about it here! If you are a grasshopper user and also use Revit then this is what you have been waiting for!

Click on this blog post if you want an example on how to get Revit Surfaces into the Rhino program. For this example I created a "Rhino" in Revit then converted it to Rhino geometry via grasshopper.

See another example below of Grasshopper for Revit side by side with Dynamo for Revit just for comparison purposes. In this example the total area of structural beams in Revit is calculated. 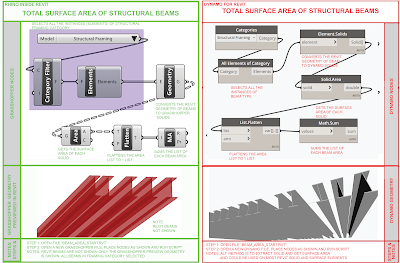 With Grasshopper for Revit it now offers a new plethora of functionality that taps, all the grasshopper add-ins including Human UI, and many others and gives you access to all of Rhino’s geometry creation tools

WHERE DO I GET RHINO INSIDE?
So how does one start to use Rhino inside Revit? Currently Rhino inside Revit is an add-in that could be found here.
https://github.com/mcneel/rhino.inside/tree/master/Autodesk/Revit
Also, you would need a licensed version of Rhino (at least up
To version 6) and would need to get the WIP (version 7 beta) here.
https://www.rhino3d.com/download/rhino.inside-revit/7/wip

I plan to show the world this amazing technology through this blogsite, conference presentations, and training. I am currently writing a book "The Dynamo Handbook" and I also will be adding in some Grasshopper for Revit examples within the handbook for easy reference...

Have you ever wanted to create orthogonal Grids in RAM Structural Software?
Its easy if you use Dynamo, C# and the RAM API.
See the image below 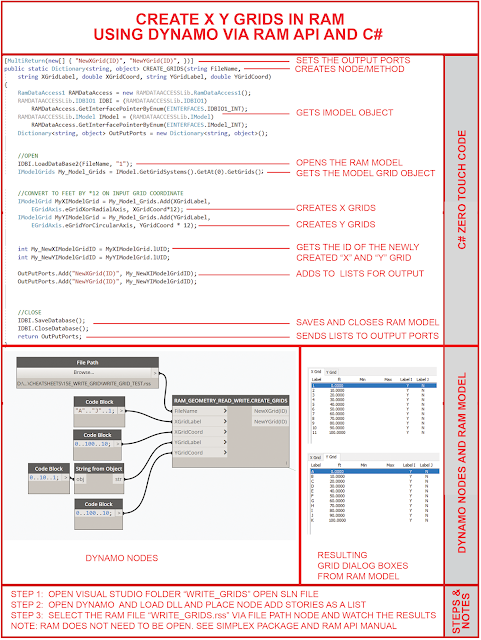 For more information see previous Blog on a detailed description on how to get started using the RAM API and c# and Dynamo together.Make sure to load in the Interop.RAMDATAACCESSLib.dll file that is in the RAM install directory


Posted by Marcello Sgambelluri at 8:28 PM No comments:

Hello Readers
When I was first looking into how to get started with using the RAM API for CONNECTING Dynamo to RAM. I found NO help out on the internet.
I thought I would simplify this process for you if you were wanting to get into the RAM API by creating this simple example on how to  get the story count from a RAM model. 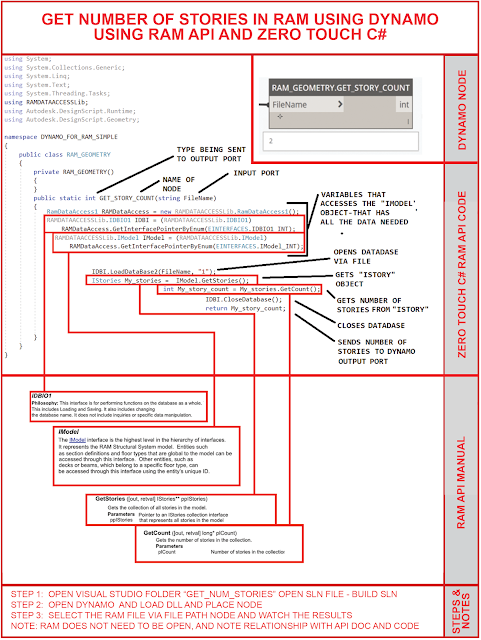 Make sure you have the proper references loaded into your class library project in visual studio.
For more API examples please reference the RAM API Manual called "RAM DataAccess Developers Guide.pdf". It could be found in the RAM Install Directory.

Note: It was written by developers for developers and its not always straight forward so I showed the direct relationships to the C# Code. Also all the examples in the manual are NOT in C#.

Also download the Dynamo Package called "Simplex" if you want more Dynamo for RAM nodes.
If you want to know more about Dynamo then learn about it here. https://dynamobim.org/
Also if you have Simplex comments post here. https://github.com/marcellosgamb/SIMPLEX

Posted by Marcello Sgambelluri at 10:54 AM No comments: